One of the people I follow on social media is Bootsy Collins. He began his rise to fame as the bassist for James Brown, later joining George Clinton’s Parliament/Funkadelic consortium. But Bootsy became a star in his own right, with hit singles from Bootsy’s Rubber Band, his Star basses and glasses, numerous collaborations with Bill Laswell, and guest spots with various artists such as Deee-lite & Fatboy Slim. I have actually been fortunate to meet Bootsy a couple of times – you may have seen this as my profile picture: 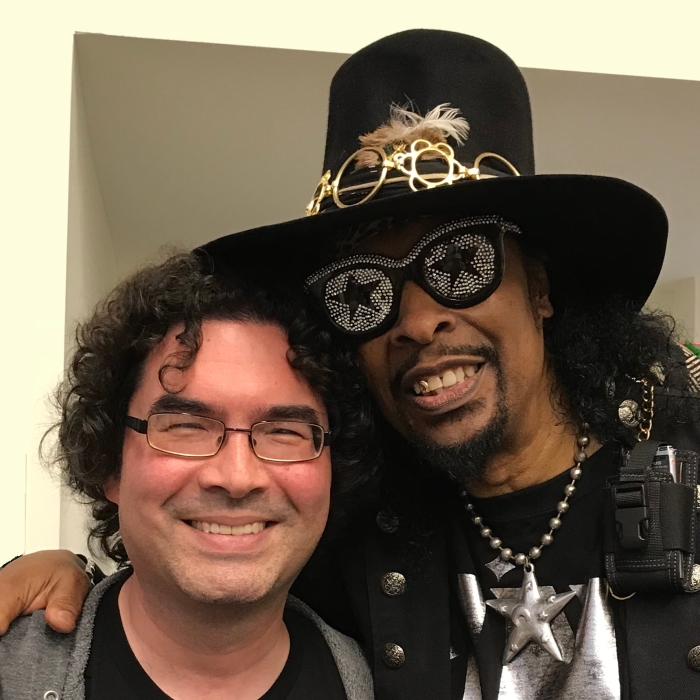 You might expect this in my hieronymous music blog, but why here in my Gyokyo Buddhist blog? Well, this is what Bootsy posted on Twitter the day before Easter:

The “One” for Me, might not be the “One” for U & Vice-Verse. Funk says; We have different taste! Yr Father Don’t have to be My Father for us to be in the Same Family. Families fight too. Funkateers we all gotta Share the Air, it Makes Good Sense to Care! Bootsy baby!!!

The "One" for Me, might not be the "One" for U & Vice-Verse. Funk says; We have different taste! Yr Father Don't have to be My Father for us to be in the Same Family. Families fight too.😲 Funkateers we all gotta Share the Air, it Makes Good Sense to Care! Bootsy baby!!!🤩 pic.twitter.com/HNt1r1q0f2

I find this to be a profound message of diversity and acceptance. Bootsy has been talking about the “One” for decades – it is the essence of funk taught to him by James Brown. He can be seen and heard describing the approach in this video clip from the BBC Rock School series from the ‘80s (I have vague memories of my friend Tobin playing this for me while we were in high school in Tokyo.):

Basically, you hit the downbeat – the “One” – hard, then you can fill in all the other spaces, or leave space in the other spaces. But is this the “One” that Bootsy is talking about here? The introduction to a 2017 interview with Vibe suggests otherwise:

Bootsy Collins is a firm believer in the creator, or as he likes to say, the one. His faith, paired with drive and patience have kept him sane in an ever changing world.

This seems to be backed up later in the interview:

I would hope that someone who isn’t aware of funk would learn something from this album.

That’s pretty much the key. I didn’t know anything. I was 19 traveling around the world with James Brown. I couldn’t believe it at the time. You just never know what the one has for you. You just take what you got and you do the best you can with it. You just have to keep moving.

This article suggests that the “One” could be equated with the Christian God. But in the Bootsy Collins episode of Mike Judge Presents: Tales from the Tour Bus, Bootsy is more explicit:

The concept of the One works not only in music but in life, y’know – you gotta figure out what that one is for you, and keep coming back to it. And for me, that just meant being in a great band. Playin’ it is one thing, livin’ it is a whole ‘nother thing, but when in doubt, just come back to the One.

As a multiracial ½ Buddhist Minister ½ Bassist, this is fascinating for me. On one level, he is talking about music, and on another, possibly talking about a greater, deeper spiritual reality. I love the fact that music (funk) and spirituality (?) are interwoven. But going back to the post I began with, the recognition that there are multiple “Ones” is the key insight that we need right now. Whether with freedom of religion in the United States, or religious tolerance throughout the world, as long as we cling to our own teachings as the only Truth then we will always have conflict and discrimination. One of the hardest things to do is to allow the Other to be themselves, even if “they” are completely different than “we” are. As a multiracial person of a minority religion, I often feel “Othered” in the current climate of the United States, and yet I also need to beware of doing the same thing to others/Others.

This morning’s bomb attacks in Sri Lanka are a chilling reminder that there is still so much hate in the world – as of yet no one has claimed responsibility, but the fact that Christians were targeted on Easter seems to point to a religious agenda. The words of the Dhammapada – “Hate is not overcome by more hatred; hate is only overcome by the absence of hatred” – and Martin Luther King Jr. – “Darkness cannot drive out darkness; only light can do that. Hate cannot drive out hate; only love can do that” – are especially relevant today. As soon as we give in to hate, accepting it and allowing it to be a driving force in our lives, then we begin to slide down a slippery slope. I hope that Bootsy’s suggestion that we can be different and yet still be part of the same family touches some hearts – at the very least it reinforces a view that I hold personally and reminds me to resist hate and instead listen and try and learn.