Continuing this #throwbackthursday series with journal entries I wrote after receiving Tokudo Ordination in 2004. I talk a bit about the other people attending the training session with me – I guess I was kind of bitter! Reading now, I think I painted with a bit too broad a brush – unfortunately, the jerks often make the strongest impression. As in part one, I’ve added a couple of notes.

One of the interesting things about Jodo Shinshu is that the priests can marry. Actually, they’re more often called “ministers” in English because of this (paralleling them with Protestant ministers vs. Catholic priests or monks), but in Japanese the same term, “soryo” 僧侶 is used. Shinran, the founder of the sect who lived from 1173-1262, was one of the first monks in Japan to openly marry, and his interpretation of Buddhism reflects this. (Actually, almost all Japanese Buddhist sects allow marriage, though most of them only since the Meiji Period, i.e., since about 1868.)

As a result, most of the 120 people that were in tokudo with me were from temple families. Most were from the ages of 18-25. Many, if not most of them, were there out of obligation, not because they wanted to become priests. (2) Therefore, 40-50% of them slept through 80-90% of the lectures. Many of them were really spoiled. A few of them were really ridiculous, clueless. Some of them really didn’t want to be there. The leader of my group had the most disinterested look on his face 99% of the time. A couple of the guys in my group were real clowns – they would never shut up, always making stupid jokes or mocking the chanting, teachers, etc.

Of course, there were exceptions. Most of the people who were interested in what was going on were older – maybe late 20s and up. A few of the people in my group were really great – even if they weren’t totally interested in Buddhism, they worked and studied really hard. I’m really glad to have met them, and look forward to continuing the friendships that developed there. It was definitely a shared experience – I’ll always remember these guys as members of my tokudo group.

All said, it’s a very strange system – fortunately not being perpetuated in America. Hopefully some of these people will really hear the Buddha Dharma at some point in their lives and awaken the aspiration to help people, rather than just treat it as a job that they would rather not be doing…

Here’s a picture of some of the group – this was taken on the morning of the Tokudo ceremony after the training session is over – I believe I am the person in the lower left corner looking at the camera. 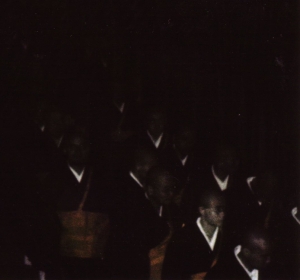 (1) One woman in my class at Ryukoku University was the only daughter – her intention was to become the “jushoku” (resident minister) herself, rather than marry a man who would be adopted into the family and become jushoku. My impression is that Nishi Hongwanji has a lot of potential to be socially progressive, but is also characterized by a lot of the social mores and attitudes of the dominant society.

(2) Please remember, these numbers are not based on any kind of research, they are purely my own observations. Looking back, I think I was a bit harsh in this section. I think some of the attitudes I saw can be connected to the difficulty of the training session – everyone is exhausted from lack of decent sleep and the strenuous schedule – as well as the general attitude of the training – it is definitely “strict” as opposed to “nurturing” – and we actually had it easy compared to how it used to be! But that’s for another entry…